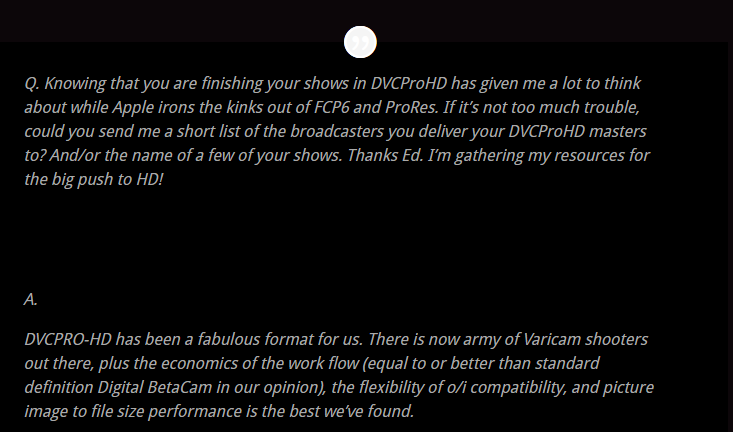 We are a television post production company specializing in mobilized, remote video editing services. In the near future I plan to post more about what we do and the philosophy behind our unique approach to mobile video post services.

But today I’d like to start off by sharing an email I wrote recently for an editor friend who was guiding one of his clients to an HD workflow. Many production companies have been working in High Def for years, but many others have not — and it can be an intimidating and expensive transition without guidance. I’ve had lots of great experience using Panasonic’s DVCPro-HD formats and I guess this letter sort of evangelizes it, but for me really it’s more about the workflows I can develop around any format. As I wrote this I realized that, up to this point, DVCPro-HD and Final Cut Pro have the tools proven to fit my needs (and budgets) the best.

Propinquity? Perhaps, but here is my experience:

Q. Knowing that you are finishing your shows in DVCProHD has given me a lot to think about while Apple irons the kinks out of FCP6 and ProRes. If it’s not too much trouble, could you send me a short list of the broadcasters you deliver your DVCProHD masters to? And/or the name of a few of your shows. Thanks Ed. I’m gathering my resources for the big push to HD!

DVCPRO-HD has been a fabulous format for us. There is now army of Varicam shooters out there, plus the economics of the work flow (equal to or better than standard definition Digital BetaCam in our opinion), the flexibility of o/i compatibility, and picture image to file size performance is the best we’ve found.

It holds up very well to color correction and standard timeline effects rendering without the kinds of compression degradation you see in lesser formats like HDV*. Panasonic’s formats are not as expensive and cumbersome as HDCAM, and DVCPro-HD offers true variable frame rate options in a progressive frame with an apparently richer color space. It is still a compressed formant however so if you need to do heavy effects work I recommend digitizing the footage uncompressed (720 or 1080) onto a properly equipped (Kona/Decklink, Raid0 SATA, etc…) system and work from there. But it’s best feature is the ability to log and digitize on a lesser system (like a laptop) using firewire while not tying up your main edit system**. It also down-converts very nicely to standard def.

The new P2 camera option offers a whole new realm of flexibility. But don’t be mistaken about what P2 promises. As of now with Final Cut Pro, when you import P2 you are pretty much stuck with the statistics (frame size, frame rate, aspect, etc…) of the camera source. One of the advantages of tape digitizing is the ability to transcode the footage (to SD, for instance) in real time using a capture card.

I could go on, but suffice to say we do all of our origination on Varicam 720p (frame rate is determined by the look we want) and then digitize and edit to the output format that our broadcast client needs. We find Varicam’s variable frame rate capability to be invaluable.

In our HD sports documentary series Fields of Glory and Hardwood Heavens for MoJo on Comcast — we use a Kona card to transcode and edit in DVCPRO-HD 1080i60 with no appreciable quality loss. From there I can master to the required HDCAM format, but we don’t have to pay HDCAM production rates to get there — and MoJo’s QC department has never made sound.

We’ve done 3 seasons of a show called Nike Training Camp for College Sports Television, shot on Varicam and (believe it or not) delivered for broadcast on DVCam (DV25). They loved the quality boost that HD origination gave them, and it cost us only a fraction more to shoot it on Varicam compared to DVCam or BetaCam SP.

We’ve produced commercials for the NY Yankees and PSAs for Honda using the format.

We’ve produced a series of 9 direct to DVD children’s videos, Curious Buddies for Nickelodeon, Shot at 720p24 and 720p60 (the latter offers a great slo-mo capability), digitized and edited at DV50 and mastered to Digital BetaCam for DVD authoring.

One exception: last year we produced the broadcast series Jack’s Big Music Show for Nickelodeon. This was shot in the studio on Sony HDCam, digitized as DVCPro 50 and mastered to DigiBeta. It worked fine, but in the end, for numerous reasons, the producers plan to use a Vericam studio set-up instead next year.

We have an ongoing relationship with one of Comcast’s OnDemand channels delivering short-form instructional content. The shorts are all shot on location using 3 Varicam cameras plus a P2 and mastered for broadcast in HD and SD.

Right now I think the best hardware set up is the Panasonic AJ-HD1400 fully loaded (don’t be tempted to buy a used 1200a at this point), Kona 3 or Decklink HDSDI capture card, G5 or MacPro, a solid SATA RAID drive setup (I like Caldigit’s offerings right now, but you can build your own RAID array for far less money) and obviously Final Cut Pro.

We now have Aja’s new IOHD. It rocks. I have been working in DVCPro on our MacPro using the IOHD and it works well, (however, we’ve had only limited success running that configuration on any of our lesser machines). I’m looking forward to ingesting our Vericam footage to ProRes using the IOHD, I think that combination has huge potential, we’ll see…

* If you must work with HDV, my advice is to digitize it to a different format like DVCPro or ProRes if you can. If you can’t, I understand some editors are setting up Final Cut to render HDV sequence effects using ProRes. Needless to say, I am NOT a fan of HDV or its Long-GOP brethren.

** I’ve had purists point out that digitizing on a laptop creates a lower quality signal because of the tricks Panasonic plays to squirt it though the firewire bus, but in the “real world” I’ve never noticed an appreciable difference in the video quality.