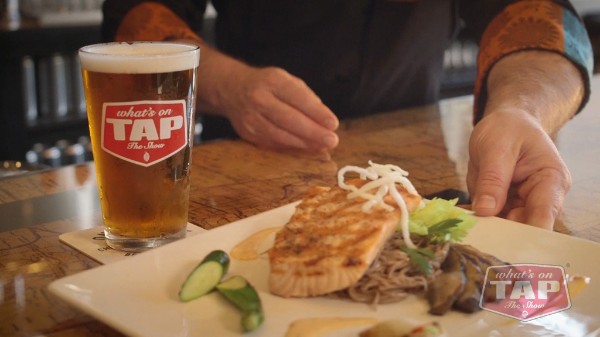 After a long day in production, I love a good beer.  That’s why this project I’ve been working on has been a lot of fun. It’s about beer! I’ve been editing promos for a new television series about craft beer and the people that brew it, serve it, and drink it.  In February, Production Manager Nancy Reid, brought me in as Lead Editor and Post-Production Supervisor for the show startup, joining the talented team for “What’s On Tap.”

Executive Producers, David Moravec and Michael Torchia of Kinzie Street Studios, have been brewing this series idea for three years. “At our studios, we create shows for other clients. But we wanted to create a show for ourselves,” says Moravec. “Craft brewers are passionate about what they do. And if we pair that passion with a live audience, a guest chef discussing food pairings or cooking, local musicians and local culture, then we have a fantastic variety show that travels across the U.S., serving up great stories.”

Beer builds community,” Moravec told me. “We share stories while having a beer. We share food while enjoying beer. It has brought people together for centuries.” Today, Kinzie Street Studios is sharing the opportunity to become involved this production that’s sure to captivate an audience thirsty for great stories. On the indiegogo page, www.thebeershow.tv, supporters can view promo videos and read more on how they can be a part of “What’s On Tap.”

As the excitement for this series builds, I am thrilled to be a part of this production and ready to explore the diversity in cultures of craft brewing. Every week we’ll travel to a new city and serve up 30 minutes of stories, entertainment, music and unexpected twists for beer lovers.

See how you can get involved at
www.thebeershow.tv