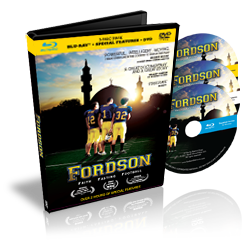 Our documentary editorial project Fordson: Faith Fasting Football is now available for streaming on Netflix and for sale.

Lovingly created by Ed at motionpost for the producers at North Shore Films, a 3-disc set of Fordson is now available for sale. You get a Blu-Ray™ and DVD Video of the 92 minute theatrical release as it appeared in AMC Theatres in the Fall of 2011 (held over for two weeks in some cities!). The 3rd disc is a 122 minute Special Features DVD which contains: Q&A with the cast from an MLK Symposum held at the University of Michigan, Extended Trailer, Theatrical Trailer, News Interviews with Director and Producers, Fordson Principal Imad Fadlallah’s Class of 2010 Commencement Address, Repositioning Islam in America TEDx talk, FORDSON Rap Video, Comments from Hillary Clinton and Michael Moore and other extras..

You can watch it here as well.